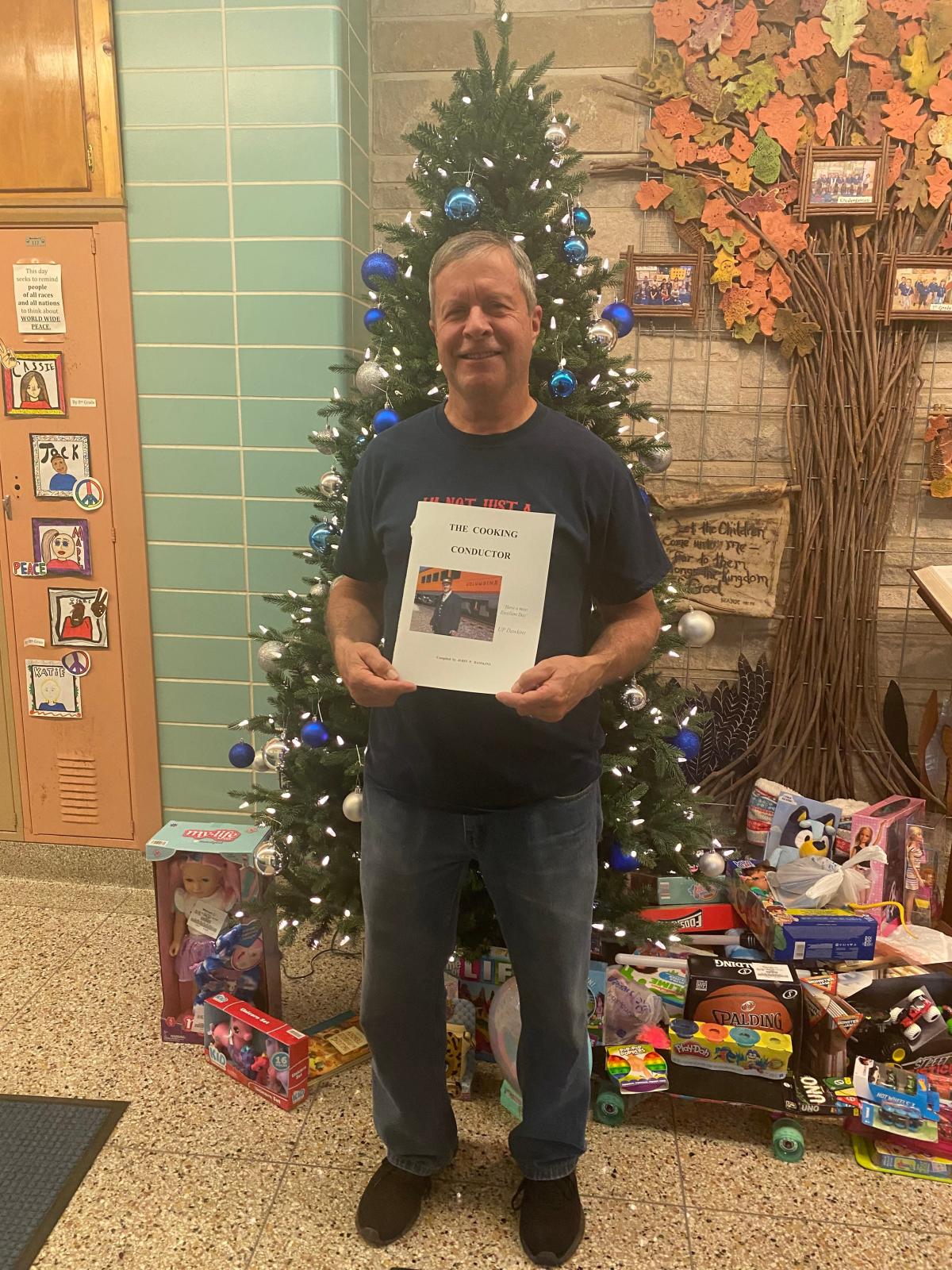 John Dawkins is a familiar face in Boone. Best known for his culinary skills, he cooks for the Boone Area Humane Society, at Salvation Army board meetings, at auctions and dinner theaters, and is a cook at Sacred Heart School. In four years, he and his wife made 97 gallons of soup for BAHS. In short, Dawkins loves to cook.

He’s retired from the railroad for the past six years, volunteers at the Boone Salvation Army’s pantry, is a “Mister Conductor” on the Boone & Scenic Valley Railroad, as well as works as a transit bouncer at Sacred Heart School.

While born in Arizona, he lived most of his life in Boone or Ogden.

“My father was born in Boone, then went out of service and lived in Arizona where I was born, and then came back to be closer to his parents in Boone,” Dawkins noted. “And I’ve traveled for the railroad for my job.”

His latest book “The Cooking Conductor” was compiled with the aim of providing people with easy and nutritious recipes. Some create it on their own, while others are modified to their taste. Chili connector is one of his signature dishes.

Dawkins began cooking for his family at the age of seven.

I asked my brother about it. Dawkins said I’m the only one in the family who loves to cook.

Being a single parent for 12 years also motivated him to hone his culinary skills.

His previous work, “The Food Pantry Cookbook,” came while volunteering at the Salvation Army’s pantry. Sometimes, he would encounter people who would refuse food, such as venison and roast chicken, because they did not know how to cook it.

“I gave the customers free cookbooks,” he said.

Proceeds from the sale of this cookbook went to his regular monthly donation to the Salvation Army. He plans to give money from his latest cookbook to the Boone & Scenic Valley Railroad.

Dawkins is very involved in the community. In 2017, he received an award from the city of Bonn for community service. He enjoys it when the school groups are making the rounds of the train he’s working on, as well as interacting with the youngsters as they cross guard duties.

“John Dawkins is an extraordinary man. He always has a smile on his face. True to his magnanimous nature, if he were near a door he would surely open it for you. He takes such good care of the Sacred Heart staff,” said music teacher Shauna Pickering. He hands out sweets or leaves goodies in the staff lounge. He has many great stories to share. He lives and loves well, and you always feel more optimistic after you’ve visited John.”

This article originally appeared on the Ames Tribune: “The Cooking Conductor” cookbook aims to get people into the kitchen